The Jarrot Mansion is an imposing brick house that dates to 1810 and is considered to be the oldest masonry building in Illinois. Entrepreneur Nicholas Jarrot and his wife Julie built the large, Federal styled house that attests to the economic well-being of the Jarrot family during the early years of the nineteenth century. There is little doubt that the Jarrots were among early Cahokia’s most affluent residents; their less prosperous contemporaries occupied much smaller frame and log houses in dramatic contrast to Jarrot’s spacious brick mansion.

The permanent settlement of Cahokia began with the arrival in 1699 or three missionary priests from Quebec accompanied by an entourage of French-Canadian laymen with the intent to build an outpost among the local Illiniwek tribes. By 1787, the isolated settlement had matured into an ambitious village, enlivened partly by creation of the Northwest Territory. Shortly thereafter, in 1790, Cahokia was chosen as the seat of the territorial government. It was this turbulent yet opportunistic territorial climate that beckoned Nicholas Jarrot, a recent refugee from revolution-torn France. The enterprising Jarrot quickly amassed wealth through trade, land and law.

He married twice, both times to prominent local women of French-Canadian descent. Marie Barbeau of nearby Prairie du Rocher died at or shortly after the birth of their first child. Jarrot’s second wife, Julie Ste. Gemme de Beauvais, was a resident of Ste. Genevieve, Missouri, at the time of their marriage. Julie is often referred to as Madame Jarrot and bore six of the seven Jarrot children. At the time of her death in 1875, at age 95, Madame Jarrot was survived by 52 great-grandchildren. Many Jarrot descendants still reside in the area and remain interested in renovation plans for the house.

The construction of Jarrot’s brick mansion occurred between 1807 and 1810. The house resembles Federal styled structures that Jarrot likely had admired during a brief residence in Baltimore, his port of entry to America. Moreover, it is believed that Jarrot sought to emulate those stylish eastern homes.

Click to view The Covenant
Lawsuits that stemmed from disputes between Jarrot and his workmen provide a wealth of information about construction and methods used to build the house. In 1808, carpenter Russell E. Hicock entered into a contract with Jarrot to “perform in a Workman like manner…joinery work of the Brick house of said Jarrot in Cahokia.” Hicock, for example, agreed to undertake “the compleat finishing” of “Ten doors…already made.” In addition, he agreed to lay flooring, build staircases, construct “chimney pieces,” and put up various kinds of trim. The contract clearly stipulates Hicock’s rates, a payment schedule, and Jarrot’s responsibilities “to give said Hicock sufficient Boarding and Lodging, washing firewood and candles for his own use as long as the said Hicock works on said house.” A dispute over living arrangements soon developed and Hicock boycotted the construction project, prompting Jarrot to hire a replacement. This series of events triggered accusations and counter-accusations that eventually culminated in ten legal actions involving charges of assault, theft, defamation of character, false imprisonment, damages and back wages, and breaking the original joinery contract. The information contained in these and other civil case files provides us with a documentary “blueprint” of the building’s construction. In addition, these records help to reveal the nature of business and social relationships of an earlier time.

Although Nicholas Jarrot died shortly after completion of his elegant dwelling, his widow Julie remained in the house until she moved to St. Louis in the late1840s. From roughly 1855 until 1886, the house was occupied by Ortance Jarrot McCracken Brackett, a Jarrot daughter. By 1905, the descendants of Jarrot who came into possession of the property no longer had a use for it.   They leased the ancestral home to Holy Family Parish for use as a parochial school building. Oliver Parks, pioneer aviator and founder of adjacent Parks air College, purchased the house in 1943 with plans to convert the building to his private residence. After making limited improvements to the property, Parks donated the house to the neighboring Holy Family parish, which used it as a convent until the late 1960s. Purchased by the Village of Cahokia in 1975, the property was finally donated to the State of Illinois in 1980. Today, the Jarrot Mansion State Historic Site is managed by the Illinois Department of Natural Resources. 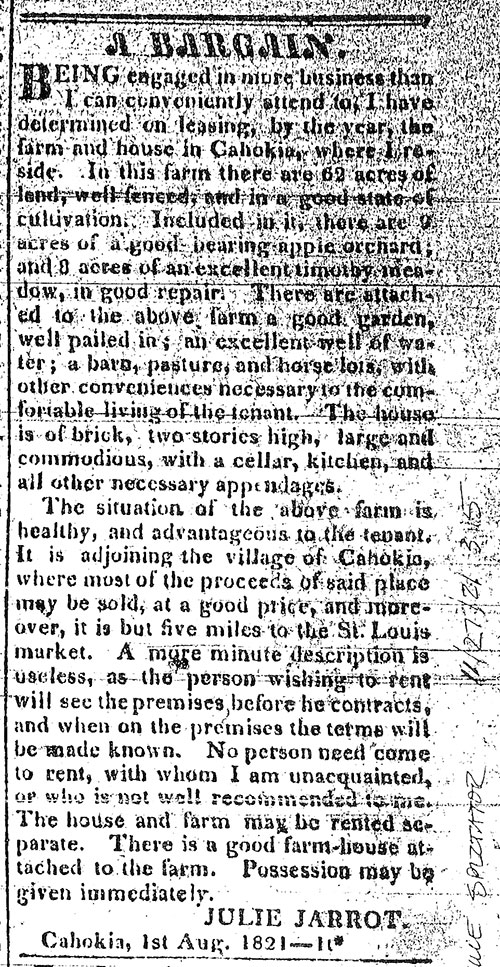